Alesia: Caesar staked out 3 military camps on the hill, including a hospital and an infirmary. They brought aniseed with them, as a treatment for stomach problems among the troops. After Caesar’s victory, he gave the hill to one of his veterans; even today, the village bears the name of Flavinius – or Flavigny.

The Burgundians, a Germano-Scandinavian tribe, invade the region. Rome officially allows them to remain in the region, which eventually takes their name: Burgundy.

A Burgundian Lord, Corbon, has a castellum (a stronghold tasked with security and watching the roads) built in Flavigny on the site of Flavinius’ villae. It is under the reign of Clovis (465-511) that the first Abbey is founded in Flavigny. In 534, Burgundy is annexed by the kingdom of the Franks.

View of the Abbey of Saint-Pierre at the end of the 17th century. Engraving of the Monasticum Gallicanum. 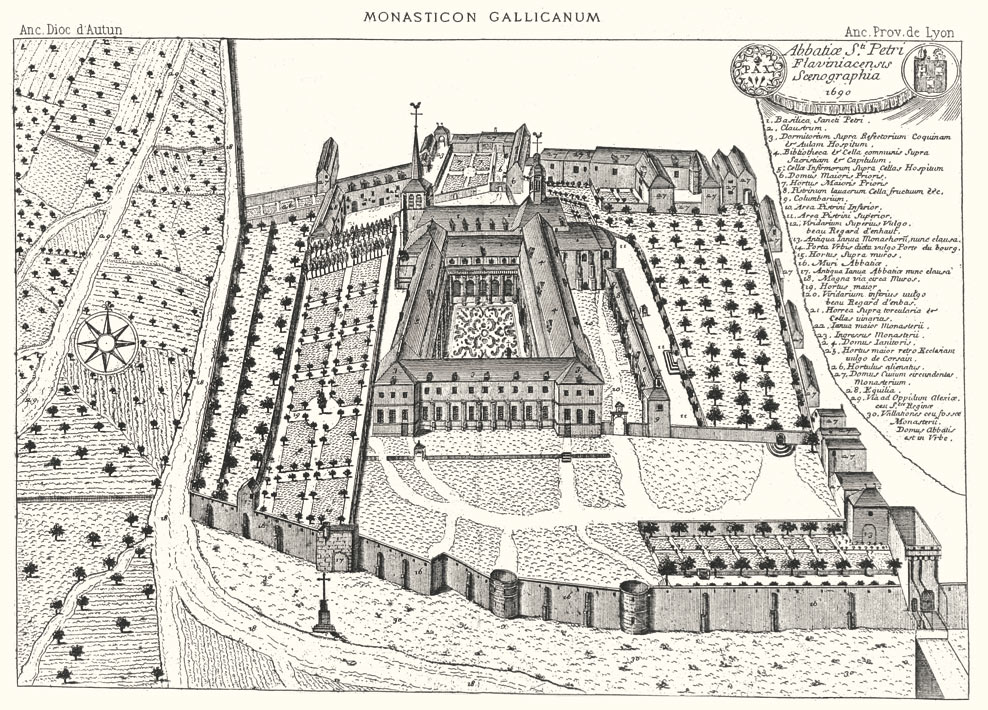 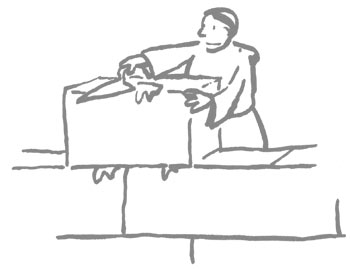 The abbey is founded by Waré (or Wideradus). Today, the abbey* is now one of the oldest religious buildings in France, and has one of the only intact vertical Carolingian structures. The monks’ daily lives, consisting of prayer, manual and intellectual work, are governed by the rules of Saint Benedict of Nursia, set down in the 6th century.

* An abbey is an enclosed place, in which men or women live according to monastic rules. Only those who live within the abbey may enter, with the exception of pilgrims who can access the crypts and worship the relics, holy remains and sarcophagi. 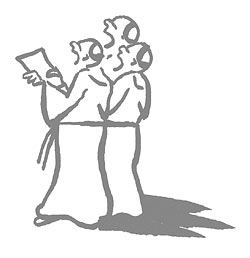 The Laus perennis, or perpetual hymn, is sung day and night in the abbatial church..

In 755, Manasses the Great, the Abbot of Flavigny, brings the relics of Saint Praejectus, the Bishop of Clermont-Ferrand in the 7th century, to the abbey. 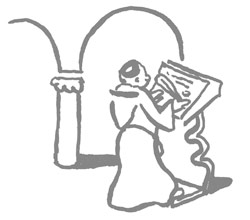 By the end of the 8th century, the abbey has acquired a major scriptorium. The books written at Flavigny are sold by Maurists in 1642 to Jesuit priests. Destroyed by a fire, the only remaining manuscript from the abbey is this book of gospels, considered a “National Treasure” and conserved in the Autun municipal library since the 18th century. Today, some of the Flavigny archives are kept in the Dijon departmental archives, which contain a significant number of historic documents, including several charters.

The ex libris, dated from the abbotship of Manasses (755-788), confirms that this book of gospel was indeed produced by the abbey’s scriptorium: Liber sancti Petri Flavigniacensis, which means “book belonging to the Abbey of Saint-Pierre”. This is the only known manuscript in existence, and was considered a “National Treasure” by the nation during the revolution.

Anise must be grown at the Abbey of Saint-Pierre de Flavigny, by order of Charlemagne! 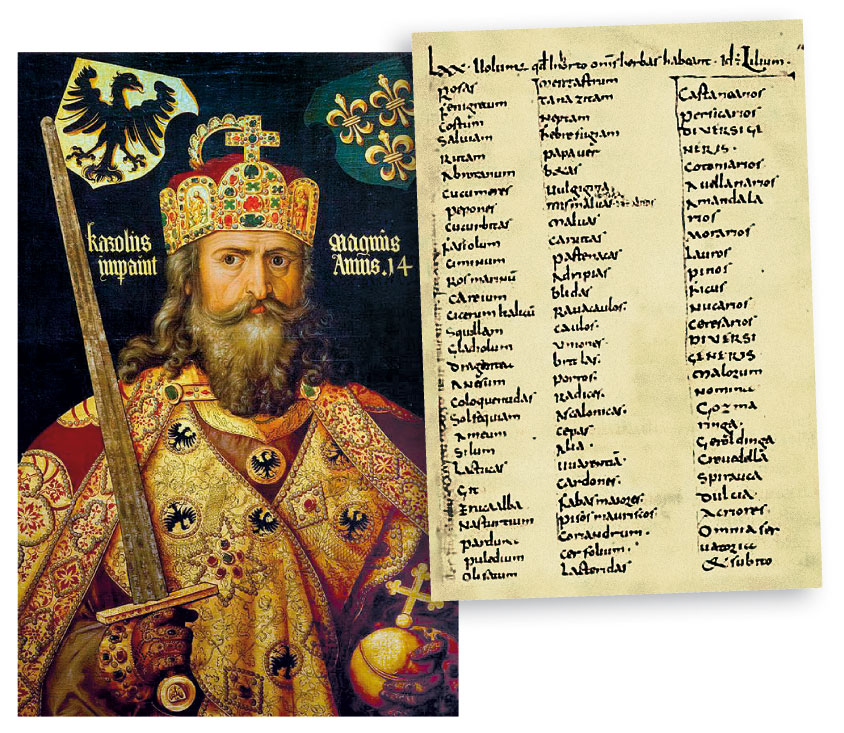 In 812, Charlemagne orders that anise be farmed by convents and monasteries. Did this give the monks the idea to enrobe the aniseeds in sugar syrup, eventually becoming the little sweet we know today as Anis de Flavigny?

In 864 or 866, the relics of Saint Regina are brought to the Abbey in Flavigny to protect them from Norman invasions. Flavigny-sur-Ozerain becomes the third most important pilgrim destination in France.

In 878, the abbatial church is consecrated by Pope John VIII. The monks reportedly gave a gift of eight pounds of Anis in return.

In 887, the Normans invade Flavigny.

The parish church and walls of the town of Saint-Genest are built. The ascendancy of the Abbey, which acquired several priories between 1010 and 1038, brings fortune to the town as well. 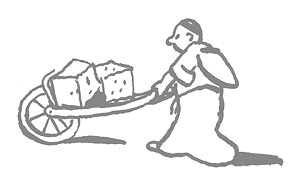 “View of the main church in Flavigny, which holds the relics of Saint Regina” 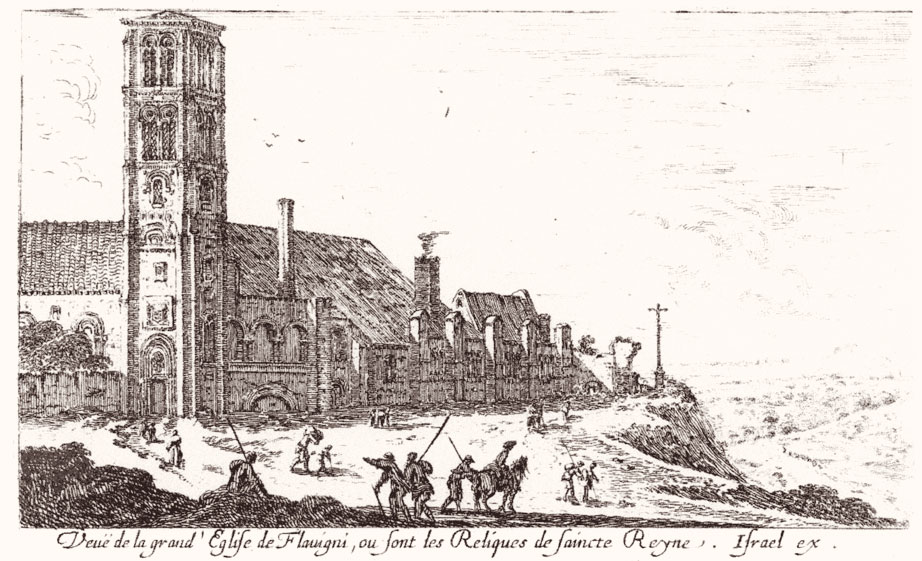 The abbatial church is rebuilt, this time in Gothic style (except the sanctuary).

Flavigny is occupied by the English, who consider it a stronghold. 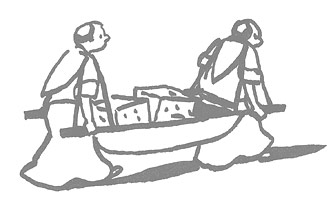 End of the 14th – beginning of the 15th century

New fortifications are built for the abbey and the town.

Les Anis de Flavigny® is given to distinguished guests by the town of Semur-en-Auxois.

End of the 17th – beginning of the 18th century

1644: the arrival of the Saint-Maur Benedictine monks, who make significant renovations to the abbey. At the same time, the Duke of Saint-Simon reports that Louis XIV enjoyed “anisse” sweets, which he kept with him in a round, flat sweet pouch.

In 1700, when visiting Dijon, the Prince of Condé receives 4 “douzaines” of Les Anis de Flavigny®, weighing thirty-eight pounds – worth 28 sols per pound. In 1703, he received a further 24 boxes of Anis.

In 1701, Monsieur de Creancey, the King’s lieutenant for Auxois, and his wife received 12 boxes of Les Anis de Flavigny® at Semur-en-Auxois, worth a total of twenty-two pounds and ten sols. 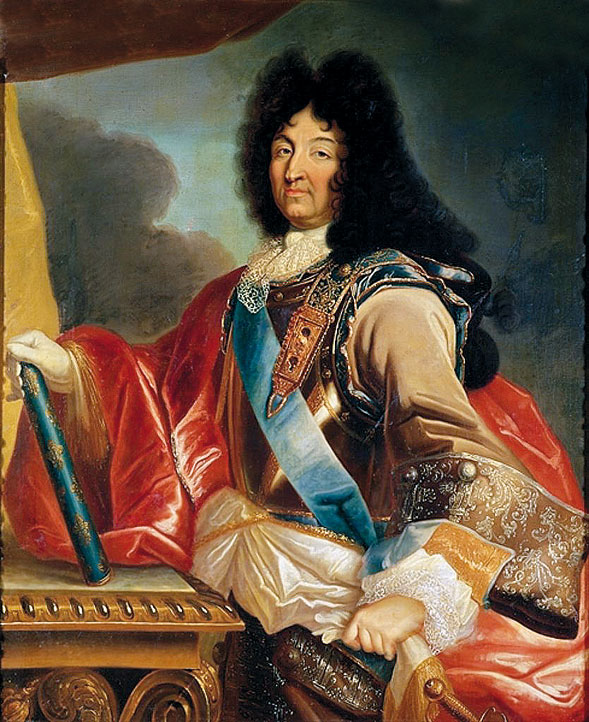 Denis Diderot (1713-1784), writer and philosopher of the Enlightenment. 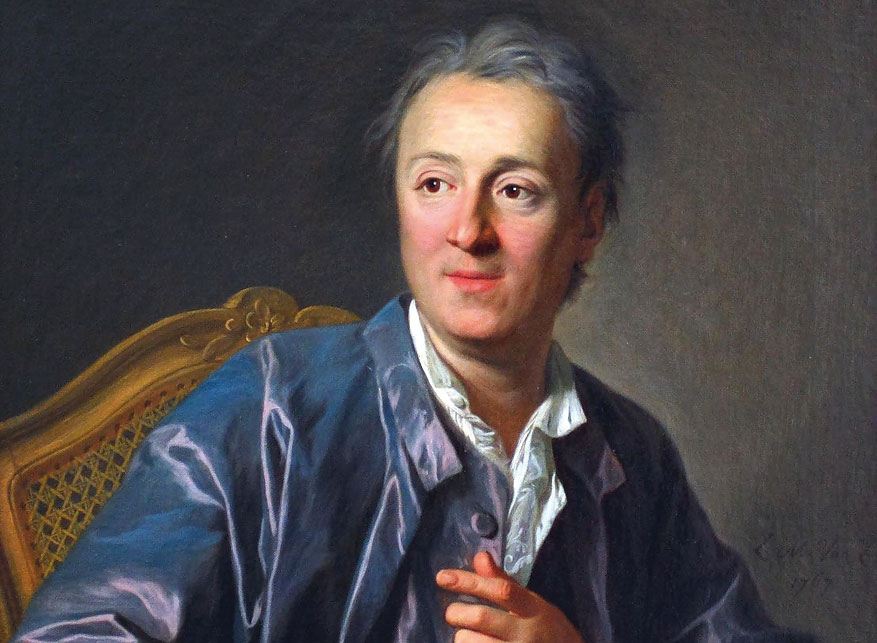 “This is known as anise or aniseed, to distinguish it from Anis candy”. Extract from Denis Diderot’s Encyclopaedia. 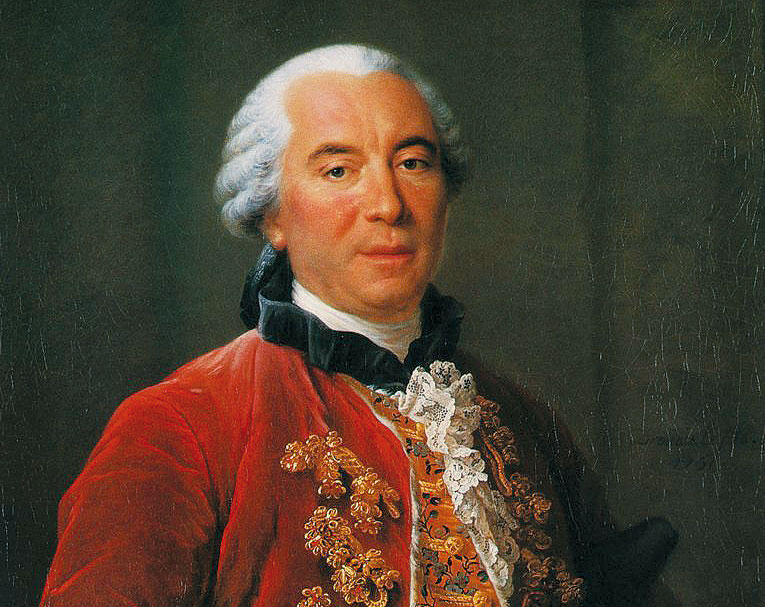 “The seeds are the core of the wonderful little sweets… Anis.” Extract from George Buffon’s Abbreviated natural history.

The Chevalier d’Eon, a spy for King Louis XV from the town of Tonnerre, brings about the signing of a peace treaty with King George V of England by giving him a gift of Anis de Flavigny ®. 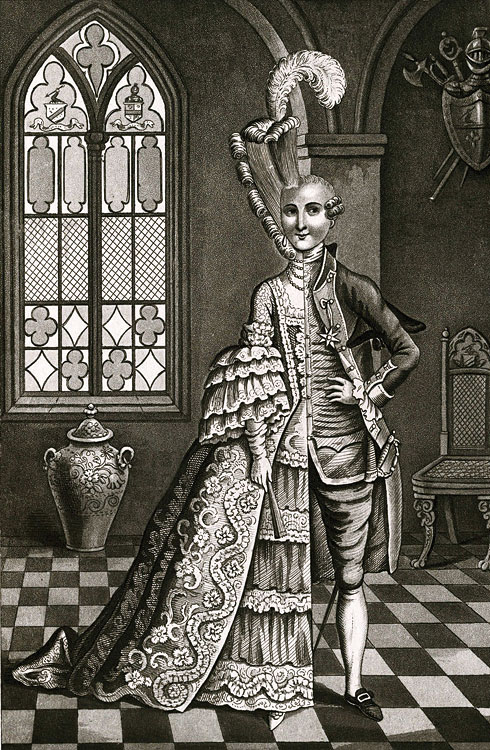 The Abbey of Saint-Pierre de Flavigny after the French Revolution. 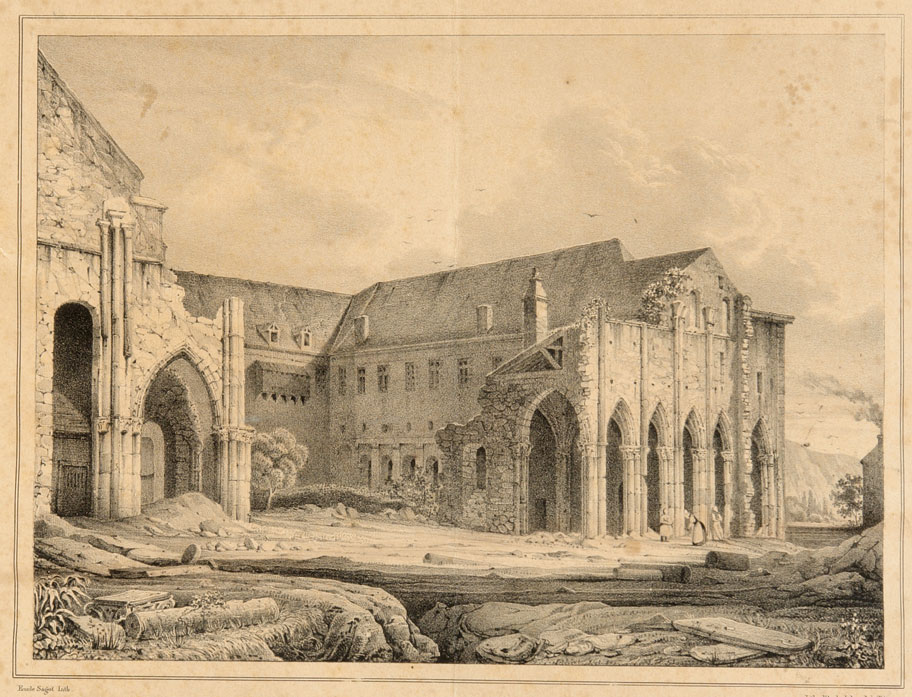 The monks flee and the building is sold as national property. Part of the church is destroyed. Some of the stones are used to build houses in the town.

Eight inhabitants of Flavigny keep the Anis workshop going, mostly in the heart of the former abbey.

Mr Galimard buys the abbey and all of the Anis factories, bringing them all together into the heart of the abbey. 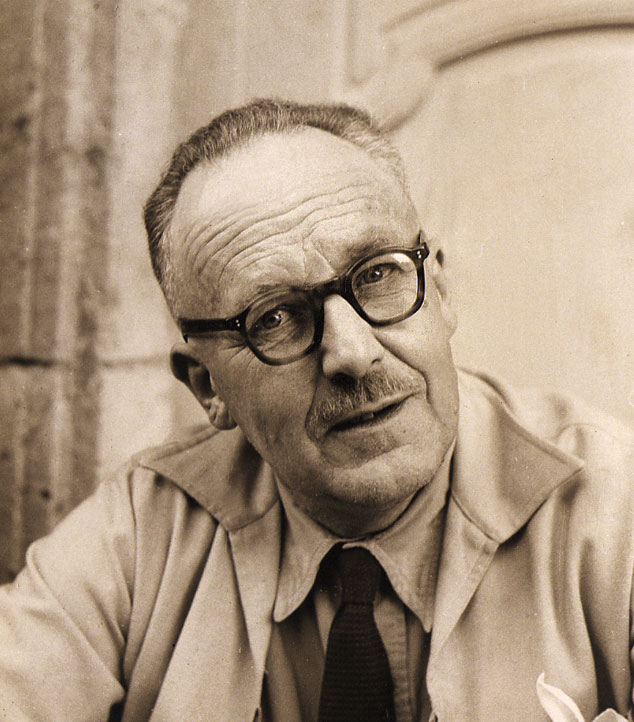 Jean Troubat takes over the Anis Factory, taking the reins from the Galimard family. It is his idea to sell Anis de Flavigny® in the first ever vending machines in stations and at underground stops. He also sells them in Paris’ first department stores, at fairs and in cinemas. By 1928, he was making 80 tonnes of Anis and shipping them to the USA, Canada, Algeria and across Europe.

Rediscovery of the crypt by Fred Guggenheim, a young American student of archaeology, who brings Jean Troubat the plan of a magnificent crypt under the abbey.

René Louis, Jean Marillier and Georges Jouven, the Chief Architect for Historic Monuments, oversee the digs which would later reveal the Chapel of Notre-Dame des Piliers. 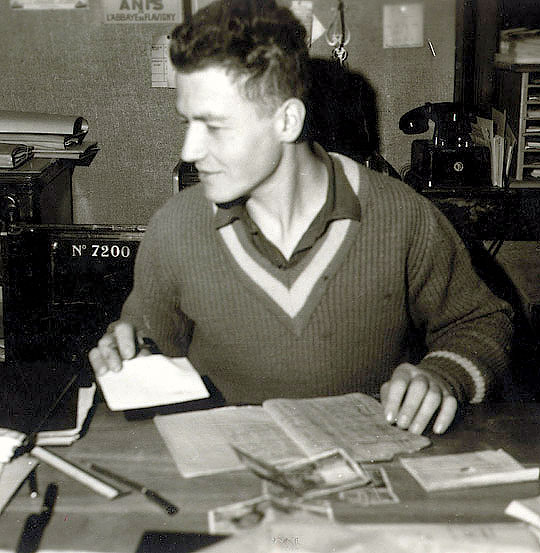 In 1965, Nicolas Troubat takes over from his father, Jean. Under his stewardship, the factory goes from 80 to 250 tonnes per year, maintaining the same production methods and the same abbey factory. Anis de Flavigny® is now sold in motorway service stations and supermarkets across Burgundy.

In 1988, the brand is awarded the “Intersuc” blue ribbon, recognising the history and longevity of Anis de Flavigny.

Nicolas Troubat was awarded the “Prix Montgolfier” in 1997 for his work to combine tradition and modernity in the development of the company. 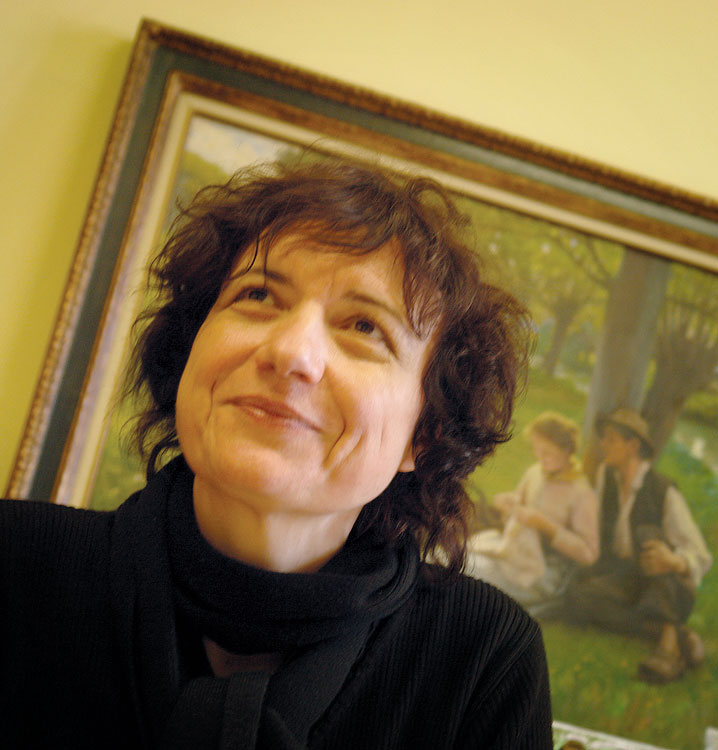 After years spent working with her father, it’s the turn of Catherine Troubat to take the helm, with the support of her sister at the head of the company. Anis de Flavigny® is now sold in garden centres, organic shops, airports and stations.

In 2013, the visible and buried remains of the Saint-Pierre abbatial church are listed as Historic Monuments.

In 2016, the Anis factory is listed as a “Living Heritage Company”.